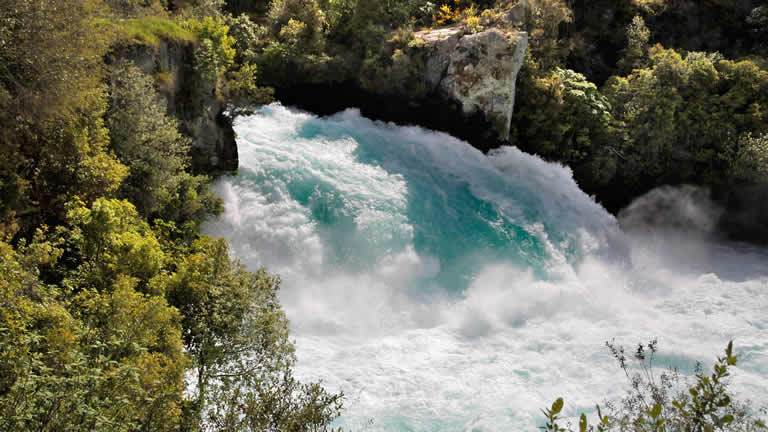 An easy walk to the Aratiatia Rapids for kids 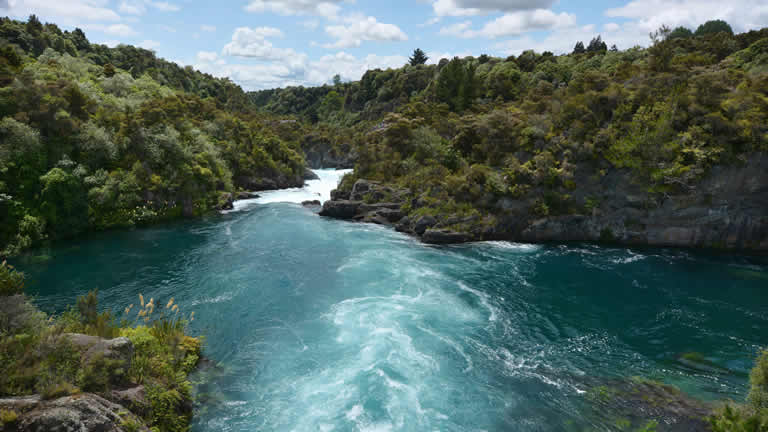 The Waikato River upstream of the Huka Falls 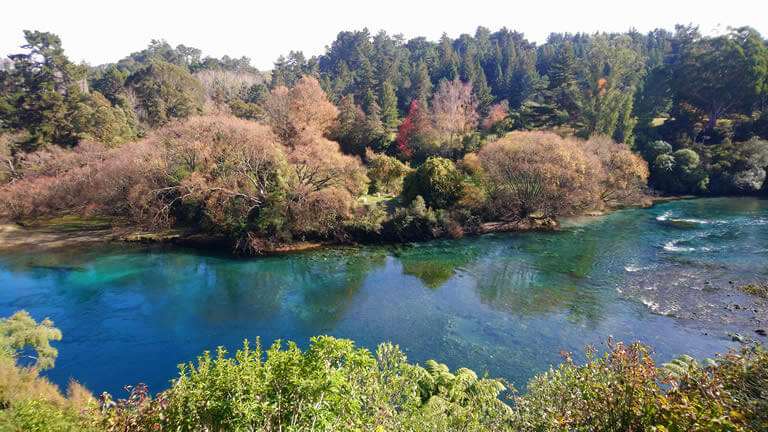 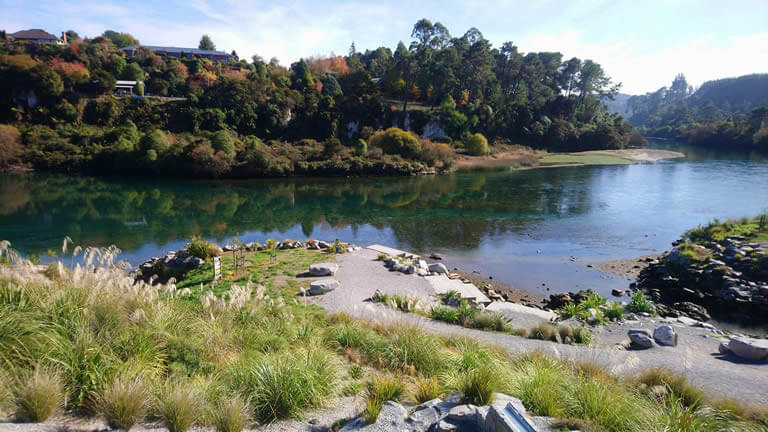 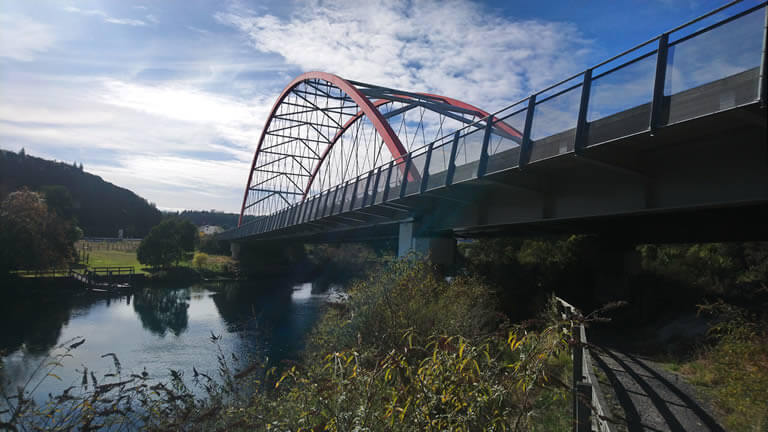 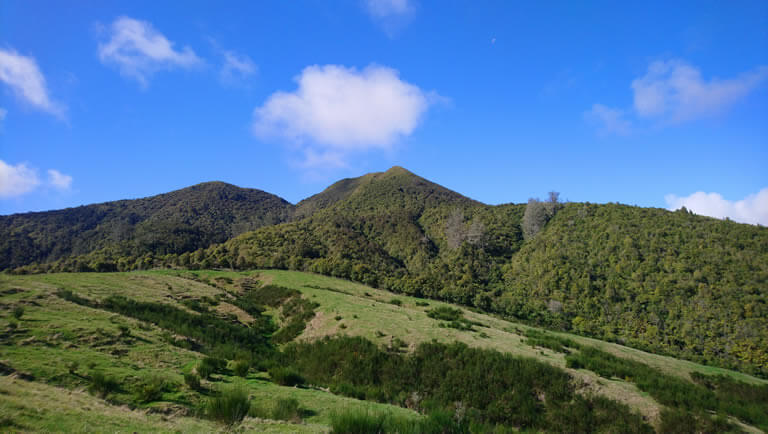 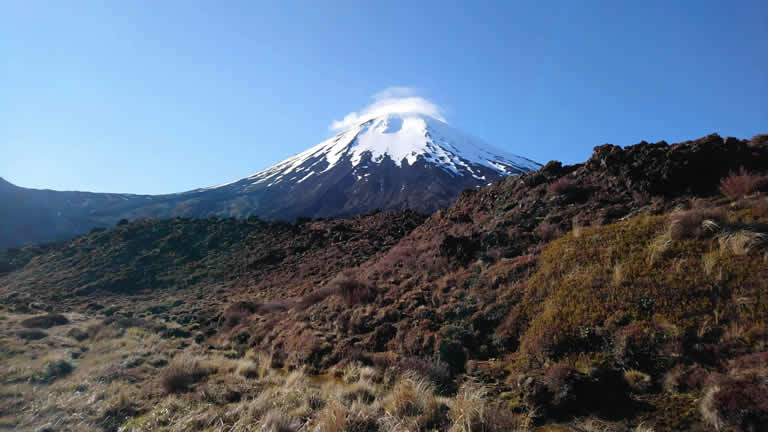 Taupo's trails, hikes, a Great Walk of NZ - and some easy paths for the kids too

An absolutely stunning hike, the Tongariro Northern Circuit is the Tongariro Alpine Crossing on steroids. Typically taking 3-4 days there are overnight hut options at Mangetepopo, Oturere and Waihohonu (in a clock-wise direction). More information can be found on the DOC website.

Not being one to shy away from a challenge, Greg (of Riverside Apartment) tried to cut that down to half a day, more or less, by running the Tongariro Circuit. It took 5 hours 52 minutes to be precise, a total elevation gain of 1,630m. The run was done in a counter-clockwise direction, which is recommended as you will be going 'against the flow' of hikers and walkers - particularly over the busy Tongariro Crossing section. The main reason was, however, that Greg missed the turn-off to the Mangetepopo Hut in the darkness. Well, it was pretty dark and the junction was a lot closer to the trail-head than expected! Never mind, flexibility is the key - as long as the weather is good!

One of the easiest sections starts you out, and on clear days it provides spectacular views of Mt Ruapehu to the south and of Mt Ngaruahoe to the north, which is a constant presence on the track. Side trips to the Taranaki Falls and Tama Lakes (named after the high chief Tamatea) are recommended if you have the time. Beautiful expanses of arid terrain coloured by pink heather and alpine mosses offer a riot of colour in this stunningly arid landscape. The track follows a lovely stream which joins the Waihohonu Stream near the hut, the first built in the Tongariro National Park.

A small section of beech forest turns into the desert-like landscape for which this park is well known for. Several steep ridges and valleys are crossed before the landscape flattens out to stone and scoria with a relatively gentle, continuous climb to arrive at the Oturere Hut.

With the rugged Kaimanawa Ranges at your back, the Oturere Valley winds its way upward through jagged lava flows and rocks from Red Crater eruptions. The trail becomes extremely steep at this point and progress is slow as you climb your way to the Emerald Lakes and the junction with the Tongariro Crossing track.

For those of you familiar with the Tongariro Crossing the terrain becomes familiar again as you reach the beautifully coloured Emerald Lakes. Turning left to climb the scree slope, the highest point of the Circuit is reached just before the incredibly richly-coloured Red Crater. The first of two steep descents takes you to the South Crater, a lovely flat surface that makes for relatively quick progress before reaching the Devil's Staircase. Navigating your way through the day-trippers doing the Crossing takes a little patience but before long you will pass Soda Springs and the Mangetepopo Hut to take the junction to the left towards Whakapapa Village.

Passing the Pukeonake scoria cone and Pukekaikiore vent, the terrain is exposed but relatively easy going for the first few kilometres before the track becomes quite eroded in places and more technical as you cross multiple stream beds. Slow going, especially if the day is hot (I classify 30 degrees as hot) and in no wind the run at this point becomes exhausting. I find I'm regularly checking the weight of water in my Camelbak to ensure I don't run out before the finish. For the sake of history, I used almost all of my 2.5L in the hydration pack. For parts of the last couple of kilometres the trail re-enters the relative cool of the bush and I'm able to stretch my legs a little to finish in under my target time of 6 hours.

I've done a few ultras and the Tongariro Northern Circuit is right up there with the best, and hardest of them. Hugely challenging (especially on a hot day) but achingly beautiful and the serenity found at sunrise on the run to Waihohonu with two beautiful peaks coloured by the morning sun was worth the effort alone.

Please get in touch if you would like more information or are considering running the magic Northern Circuit.

A lovely walk to take in a morning or afternoon. Depart Riverside Apartment turning right into Norman Smith Street. Turn right at the lights, cross the road and the bridge across the Waikato River then turn immediately left into Riverside Park. Follow the path/cycle way as it winds up the hill and rejoins Spa Road for a short distance. Turn left into the Otumuheke Spa Park and follow the main road and walkway to the thermal creek (top local tip - a great spot for a dip, even in winter with the warm, geothermal waters). You might see a trail with a large blue bike - don't take this trail - it's for mountain bikers! - so keep left and head towards the river.

Once you rejoin the Waikato River take the pedestrian track (turn right) towards the Huka Falls. The trail winds its way for another 3.5km through beautiful bush but with many stunning vistas of the river below. The water colour is something that has to be seen to be believed.

The legendary Huka Falls reward the hikers at the end of the trail.

A short drive to the end of Mountain Road (just off State Highway 5 towards Napier) and you'll find the carpark to start the trail up Mount Tauhara. The trail itself is only 2.5km long, the first few hundred metres over farmland until the bushline is reached. Winding up through native bush, the trail is relatively easy to hike and even young (but active and fit) kids will handle it without difficulty. The reward of the spectacular views from the mountain (approximately 600m above the level of the terrain and lake below) are well worth it and on a clear day you will be able to see the treble peaks of Ruapehu, Tongariro and Ngaruahoe on the Central Plateau. The recommended time is 3 to 3.5 hours but for fit or experienced hikers/joggers you can cut that time in half.

This trail is an extension of the Otumuheke Spa Park to Huka Falls path. After the majesty of the Huka Falls, the trail continues for a further 7km to a second, almost as impressive feature of the Waikato River, the Aratiatia rapids and gorge. This section of the trail is perhaps not as scenic as the first section as it moves away from the river in many parts and runs along a widening part of the valley but the impressive features of the Red Bridge and Wairakei Power Station.

The Aratiatia rapids has two view points, the mid and high - both offer stunning views of the gorge as it fills extremely quickly once the dam opens the gates. More information about Aratiatia and the Huka Falls can be read on this webpage.

Start from the Lake Taupo Yacht Club found by the Taharepa Reserve and follow the lakefront path which skirts the lake and meanders in front of some classic kiwi baches (and some beautiful homes too) around Waipahihi Bay. The path is a shared cycleway and footpath. Continue past 2 Mile Bay, Rainbow Point Reserve, Wharewaka Point and onwards to 5 Mile Bay for those that would like a little more distance.

Playgrounds (and a BBQ) are available at Wharewaka Point with plenty of picnic spots along the way. Toilets are found in each of the bays. This, along with many other walks are open for dog walking but take your leash and rubbish bags!

Choose your apartment to send us a booking request. 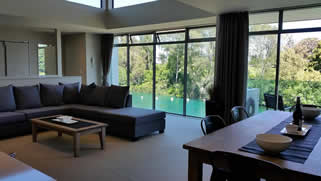